The intent of this page is to document the process of buying and importing a Chinese laser.

Originally, we looked into building a laser with off the shelf rails and optics. After researching some of the Chinese vendor options it turned out cheaper to go that route. Once we had it here we have the ability to fix and support it ourselves so that opened up more options for us.

We identified a list of vendors that have been around a while and had a community around them. This increased our chances of having a successful delivery or a vendor who would fix any problems that arose during delivery. We sent out to get quotes and then narrowed it down to the following:

They will of course take a bank wire directly but we agreed to instead do Alibaba Trade Assurance program. They were familiar with the process and made it easy.

Briefly, I believed this could be handled without a broker but the government only allows licensed brokers access to certain information. Additionally, the shipment was going to be coming into New York first which is very far away.

Ultimately, I went with:
https://clearitusa.com/

They do all communications through chat built into their website but they are very responsive and quickly answered any question I had.

We paid for the laser on May 7th. There was a lead time of a few weeks and then slow shipment by boat meant it would not arrive in New York until sometime in June. Due to a trade war with China, the current U.S. President announced a tariff of 25% on all goods from China starting June 1. Our timing on this has unfortunately been costly.

Alibaba Trade Assurance
The cost of the laser, the shipping cost, and the transaction fee by Alibaba.

Broker (clearitusa.com)
We had the option of using the broker to pay the fees (for a $10 fee) to the port authority or sending a wire ($30 bank fee). Most of these fees are those things passed through them to us. The broker's fees for their services are listed in here as well and totaled around $150.

Shipper (CTL)
The shipper also had some fees to pass along.

The local port also has a $75 handling charge.
So that brings the total cost to get the laser to our door in Knoxville, TN to $5660.60

My very rough calculation is that by shipping it via sea instead of using DHL, we saved about $800 but took 5 weeks longer.

The local receiver loaded it for us onto a utility trailer. 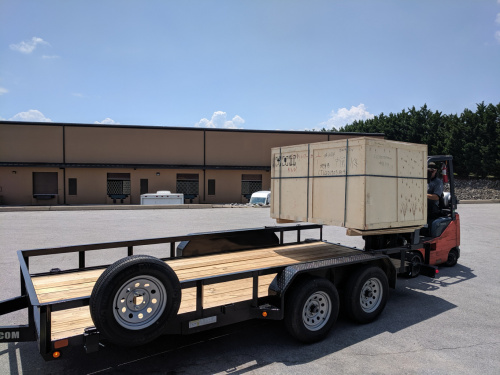 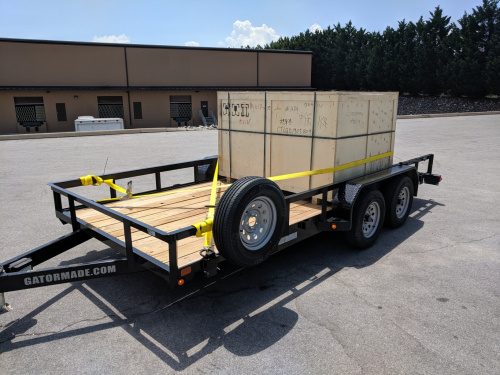 We delicately unloaded it with wood planks and about 20 people. 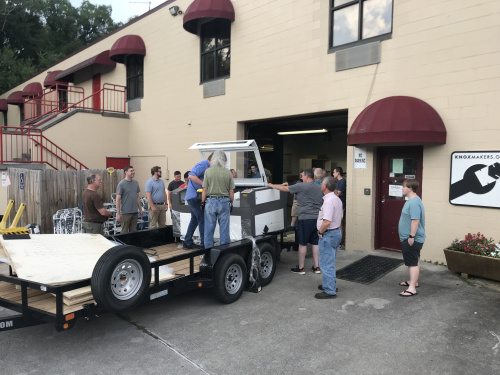 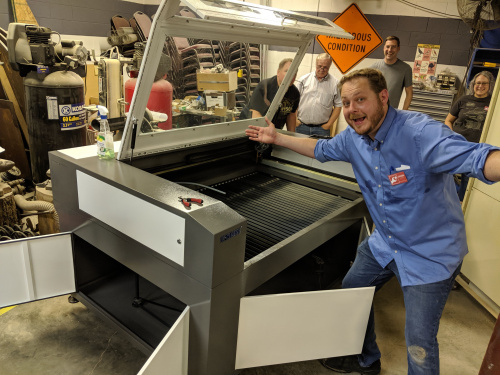 See our page on converting the laser controller and firmware